Where is the captcha toggle?

The docs on the site say there's a captcha toggle I can turn on for Sign Up, but I don't see one. Under Rules/Create the only options are Anyone, Administrator, Anyone Signed In. 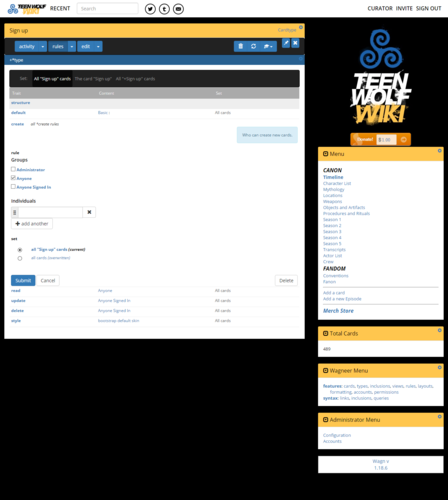 We found it by sorting By Name and turned it on. Now I get an error that the ReCaptcha site key doesn't match. I'm guessing this is because we have to use the widget code that Google provided for us. The existing code probably has your site key in it.

Where is this code found?

Can you please take a look at this? I'm sending out lots of spam emails without captcha in place and I don't know why it gets a server error when I turn the option on.

*poke* I'd really like to stop sending out undeliverable mail, which isn't going to happen until I can stop bots from signing up...

Okay, so I see that card has 3 components. Am I just supposed to Edit the public key and private key cards or am I supposed to interact with them in some other way to enter the info from google?

Well. I tried that. I still get "error for site owner: invalid site key"

There are two issues:

1) *recaptcha+public key and *recaptcha+private key have the wrong cardtype. By default they are "Basic" cards but they should be "Phrase" cards.

Go to edit > type for those cards, choose "Phrase" and remove the paragraph tags that were added to your keys because it were basic cards (a "< p>" at the beginning and a "< /p>" at the end)

Am I going to have to worry about updating all the Ruby stuff with the new version? Some things started to say that they were using deprecated versions, but when I tried to update to a new version of Ruby some of the dependencies failed and I just gave up trying fix linux stupidity.

I think at some point next year we have to drop support for Ruby 1.9.3 but if you are above 2.0 you should be safe for a while.